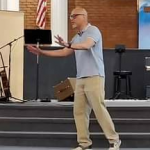 In Christ, Pastor Tim is given to “prayer and to the ministry of the word (Acts 6:4, NKJV).”  Tim emphasizes discipleship and states, “Our hope for Emmanuel is a complete reliance on God’s mercy and grace (Matthew 5:13). Through this, we will continue to develop together in Christ as a family who shares the word of God with people around us.  And this for the glory of God (1 Corinthians 10:31).”

Pastor Tim was blessed to serve as Secretary of the Southern Baptist Conservatives of Virginia from 2017-2019. To reach Pastor Tim, please call or email Ruthann Barton (703-368-9206, rbarton@ebcnva.org).

James 3:17-18 (ESV) But the wisdom from above is first pure, then peaceable, gentle, open to reason, full of mercy and good fruits, impartial and sincere. And a harvest of righteousness is sown in peace by those who make peace.

Ruthann Barton has been a member of Emmanuel Baptist Church for over 30 years.  Born in Columbus, Ohio, she married her childhood sweetheart and has been married for over 57 years.  She accepted Christ as her Savior and Lord at the age of twelve.  She has a passion for Bible Study and has been active in Precept Bible Studies for more than 25 years.  She also has a love for children and has served in Children’s Ministry since becoming a member of Emmanuel.  She now serves as the Executive Assistant to the Pastor. 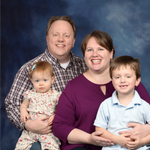 Aaron was born and raised in the small town of Lyons in the Finger Lakes region of western New York. He came to faith in Christ at the age of 11 after he received a copy of the New Testament from the Gideon’s booth at the local county fair.  In 1995, he graduated from Kent State University with a Bachelor of Arts degree in Criminal Justice studies. He currently works for the Department of Justice in the Civil Division’s Office of Litigation Support.  Aaron and his wife Sarah met in Dallas, TX in 2004, were married in 2006 and relocated to Manassas in 2008. They have two children, Charlie and Sadie. The Fletchers were called to Emmanuel Baptist Church in 2013 and have had the honor of serving the Lord here. Aaron has served as a deacon and Sunday School teacher. His hobbies include reading, studying theology, pop culture, and trying to figure out how a guy his age is going to keep up with these two young kids.

Brian McDaniel is a gifted Bible teacher and devoted husband (Reta). Brian faithfully taught theology at Emmanuel Christian School for nine years. He has been part of the Emmanuel family for decades, and Emmanuel has been blessed to have him serve as an elder since 2020. 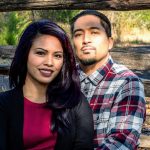 Levinia and Glenn have been married since 2011 and have four sons.  Levinia came to faith in 2003 and has served in mercy ministry and children’s ministry.  Glenn is a youth teacher.  Levinia has served on Worship Teams for eight years and enjoys leading at Emmanuel. 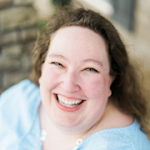 Heather grew up in Nevada, Montana, Texas, and Arizona. As an adult, she spent several years with her family in Idaho before settling in northern Virginia in 2009. Heather served in children’s ministry for nine years and has helped to lead a variety of adult classes. She has worked in a number of industries that have prepared her to assist Emmanuel with its media and communications needs. She and her husband, John, have been married for over twenty-five years. Heather is currently pursuing her master’s degree in Theological Studies. Crystal Bledsoe was born in Detroit, MI; lived overseas until she graduated high school in Ankara, Turkey; and moved to Bristow, VA, in 1999. She professed her faith at nineteen years old. After becoming a member of Emmanuel Baptist Church, she rededicated her life to Christ and was baptized in 2008. She is a youth group leader and young women’s teacher at Emmanuel.

Hobbies: fiction and poetry writing, studying theology, and spending time with her family

Mike was born and raised in Virginia, the oldest of Bill and Dottie Holloway’s 3 children. In 1973 he was married to his high school sweetheart, Patti Wood. He and his wife have a son and a daughter, Greg, and Lori, and have 7 grandchildren. “A preacher’s kid, but not a kid when Dad became a preacher.” He was saved at the age of seven and accepted the call to become a deacon in 1982 when he was 28 years old.

He has a lifelong passion for music, especially when used to praise, honor, and worship Jesus. He has a God-given passion for building things, which led to his vocation as a carpenter and contractor. Most importantly, and by God’s grace, he has a nearly lifelong devotion to Christ and His church, serving most of those years here at Emmanuel.